Forty years ago I decided to get serious about going back to engineering school, so in the summer of 1982 I bought a VIC-20, and started learning how to write simple programs. Very simple, considering the 3583 byes free for programming. But it got me motivated for the task of actually going back to engineering school instead of just talking about it. I gave up 10 years earlier when I was entering college because I was afraid that I couldn't hack all the math (especially Calculus 2 & 4).

Learning to program with the VIC got me started, but I needed more. The 22 column screen just didn't get the job done. My first Computer Science class required 40 or 80-column screens. What to do?

By mid summer 1983, everyone wanted the new, hot Commodore 64, and prices for the VIC accessory boards like the 40/80 column board from Data-20, the Machine Language monitor, the Super Expander which came with an extra 5K of RAM, and the 32K addressable memory board were falling. I bought all of them on a big sale (using a magazine ad. Internet? What's THAT). The boards completely transfigured the VIC. In fact, the advertisement for the Data-20 board said "Turn your VIC-20 into a PET", referring to the Commodore PET. I bought a 3-card slot expansion board, but it didn't have enough slots, and if I wanted to play a plug-in game, I had to take something out. That meant more wear and tear on the big card edge connector. So I tore my VIC apart. I bought a bunch of Radio Shack Push-on/push-off switches, and a nice case for a power supply, and went to work. All of the solder connections you see here were done with a Weller soldering gun with a homemade pencil tip. This is a First Generation VIC with the old style power plug.
This first gallery contains scanned photos from 35mm pictures I took at various apartments where I lived. More coming soon! 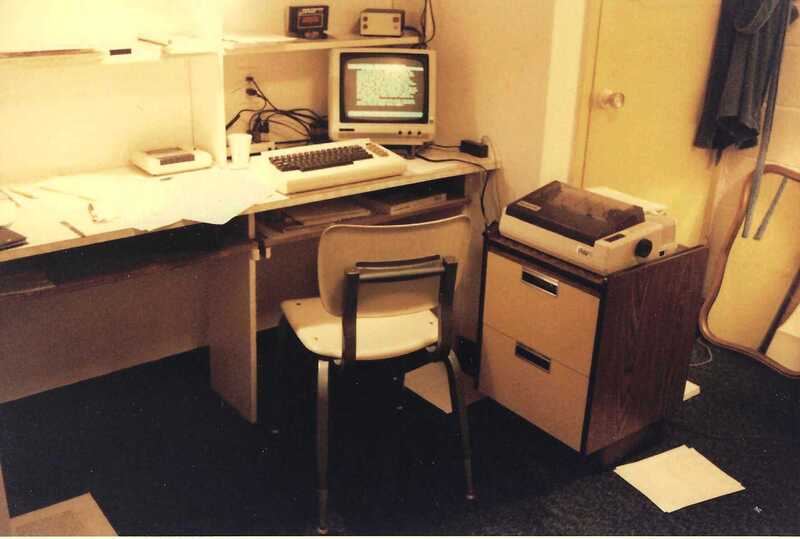 My freshman year setup in a residence hall. 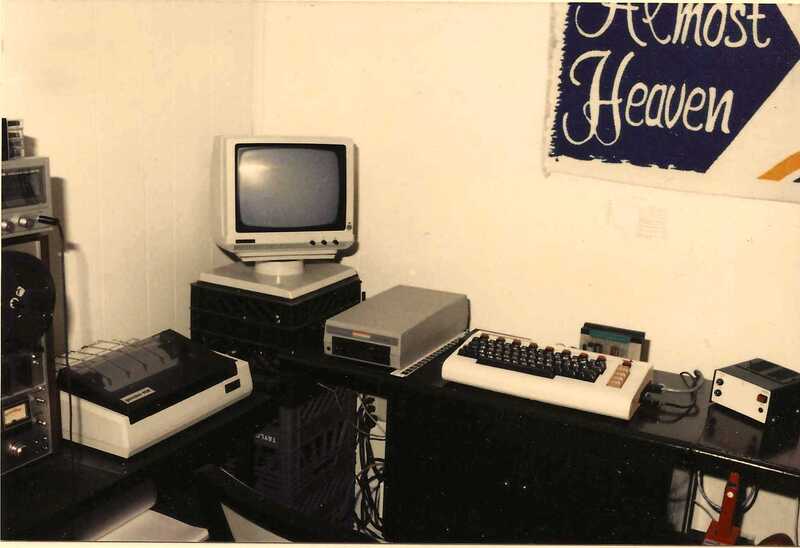 This was my setup from my second apartment (Sophomore year ) at WVU. 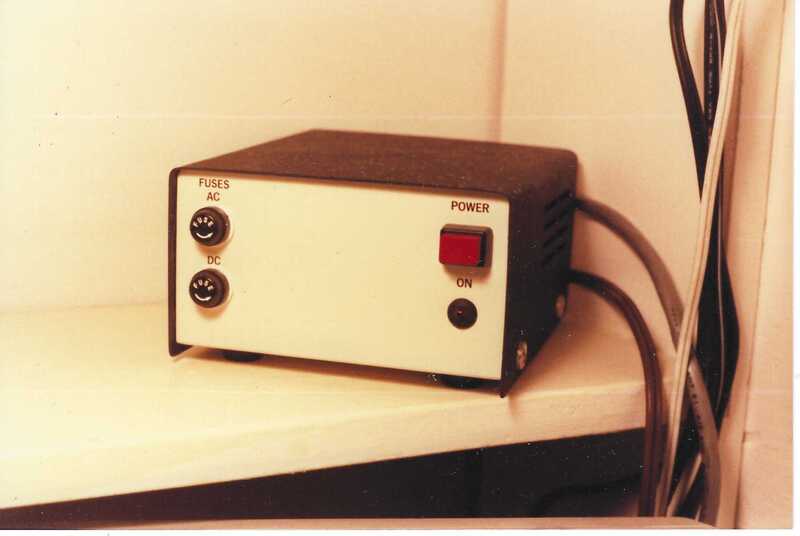 The little separate power supply is a huge convenience. 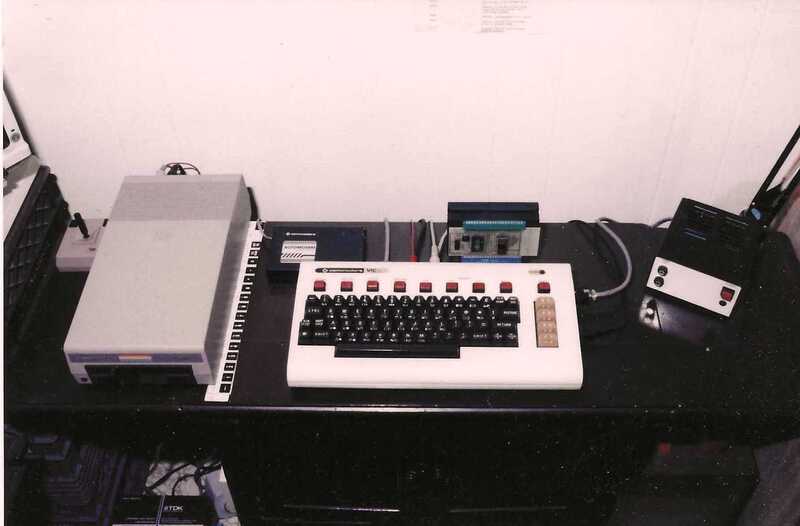 Note the expansion card on the back and the VicModem. I never finished in internal modem project. 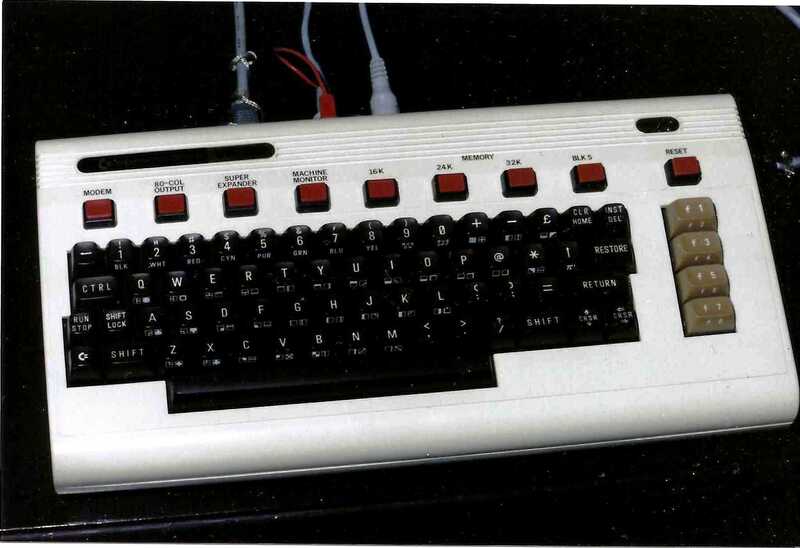 The front panel with my dry-transfer lettering. It's still intact after 40 years. 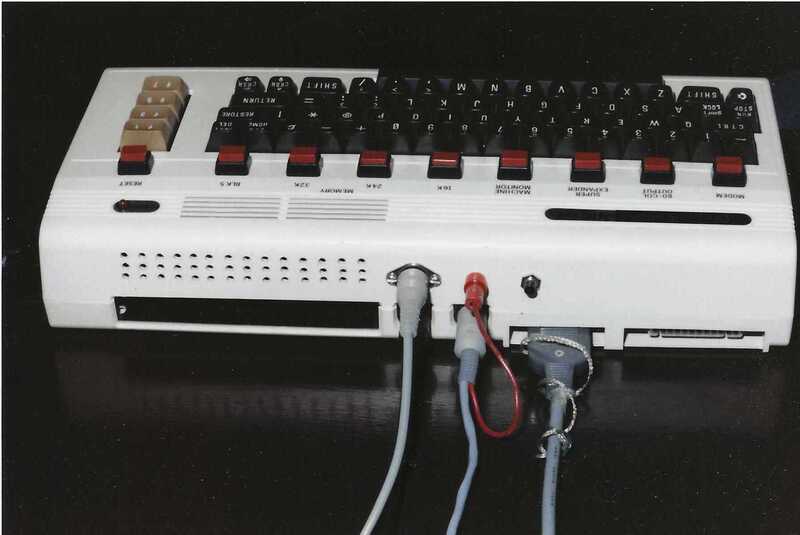 Rear connections. Note my drilled ventilation holes. The black push button let me reset the printer interface without having to reset the computer.
The below pix are recent. Despite being in a suitcase with foam, some discoloring can be seen on the case. I haven't cleaned it yet.
At one time, I was going to install an internal speaker but I decided against that. You can see some notations in my original schematic. Also, the mainboard silkscreen shows the cassette drive transistor as Q1, but on the schematic, it says Q3. The drive motor transistor is a TO-220 style case. 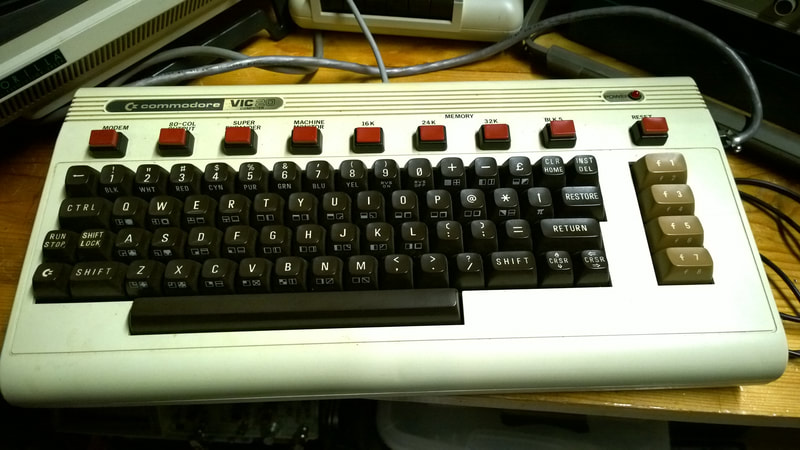 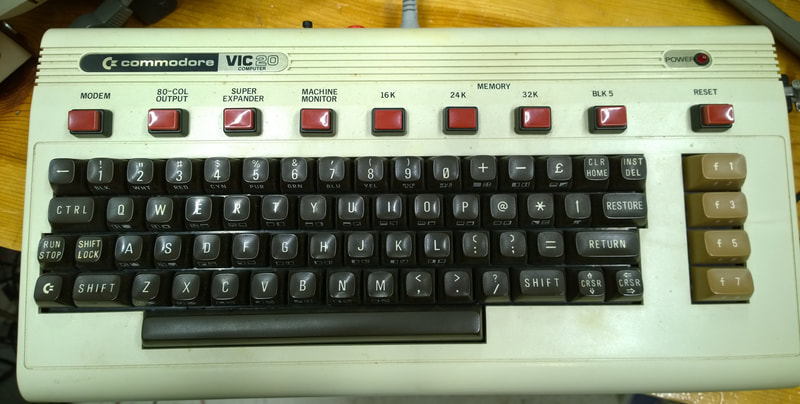 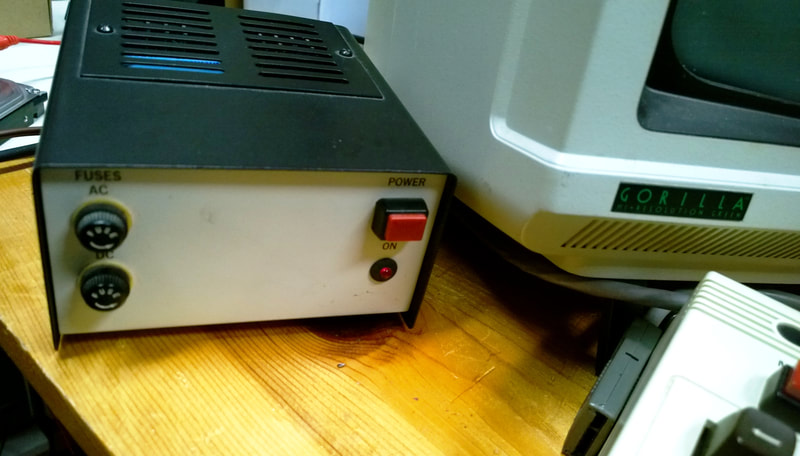 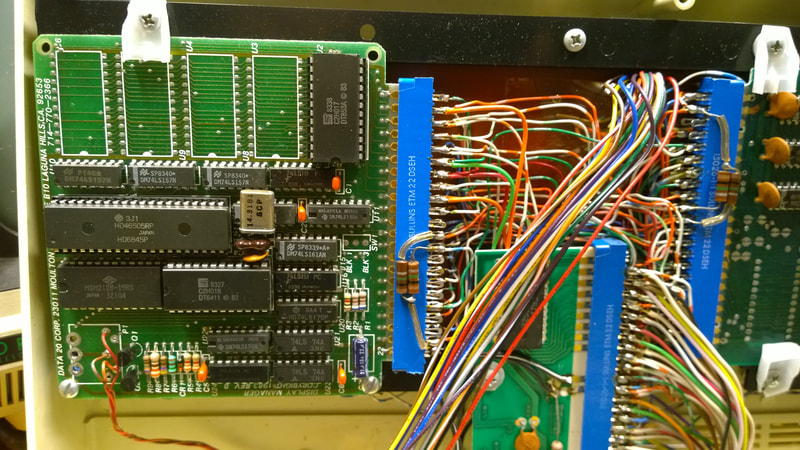 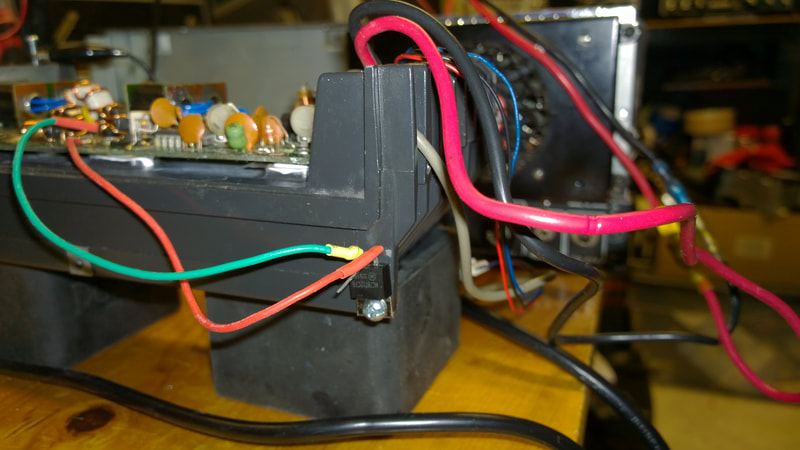 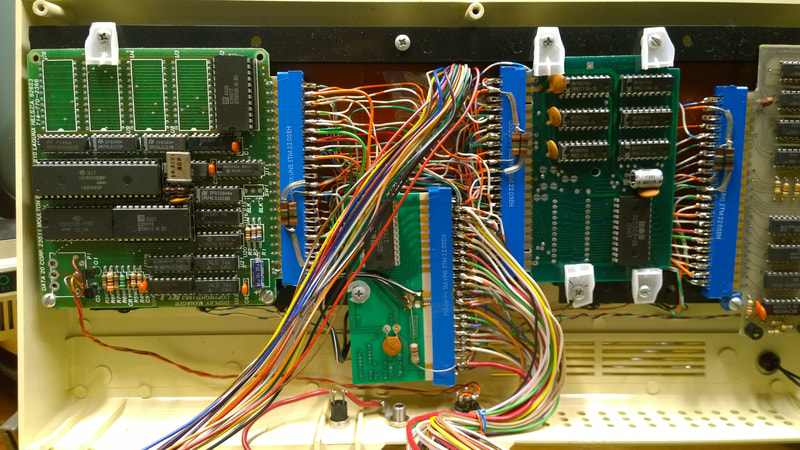 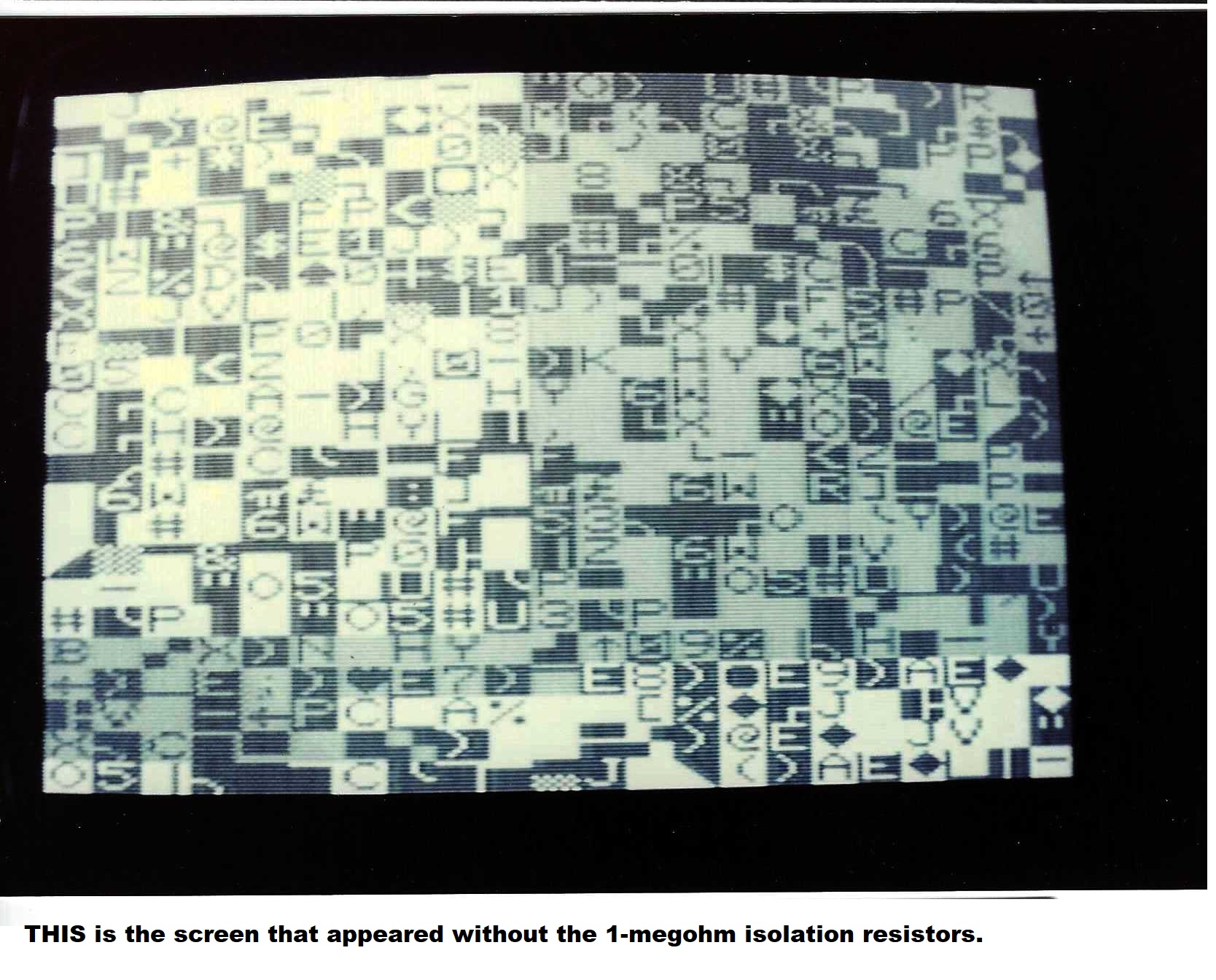 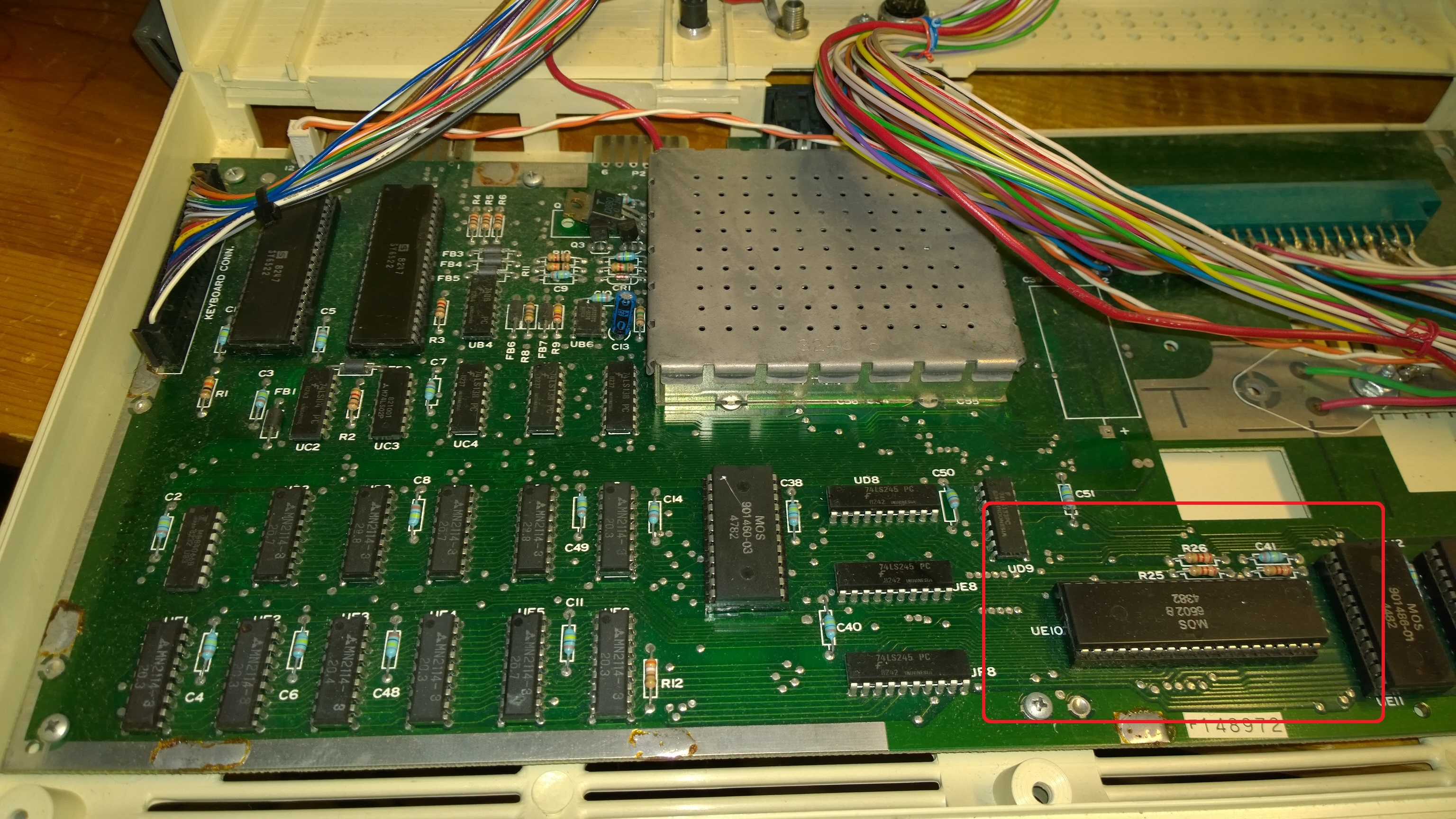 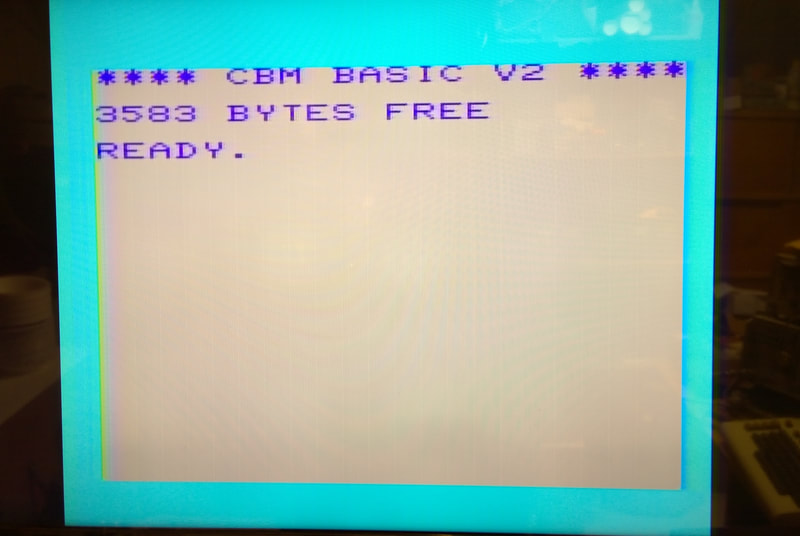 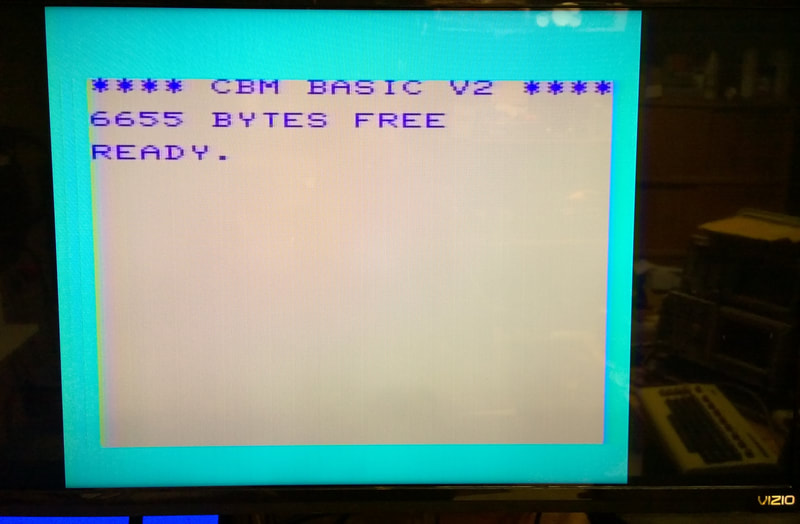 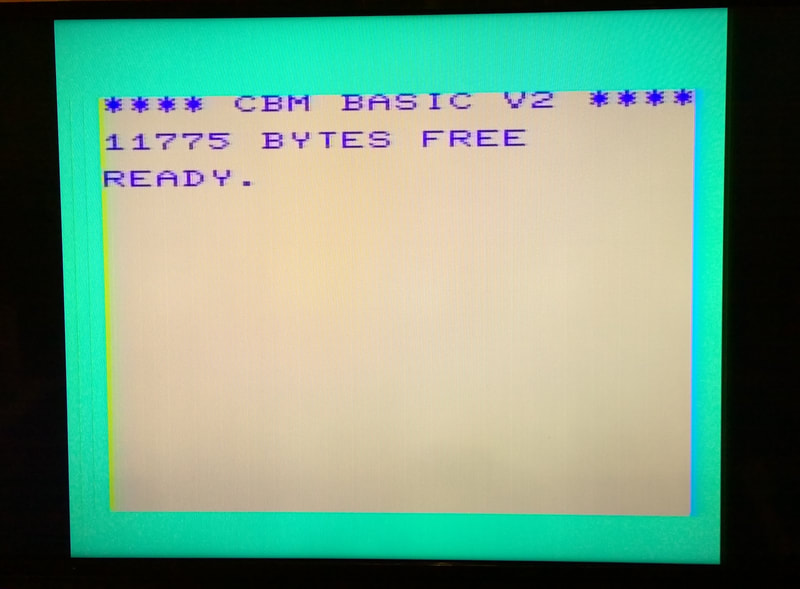 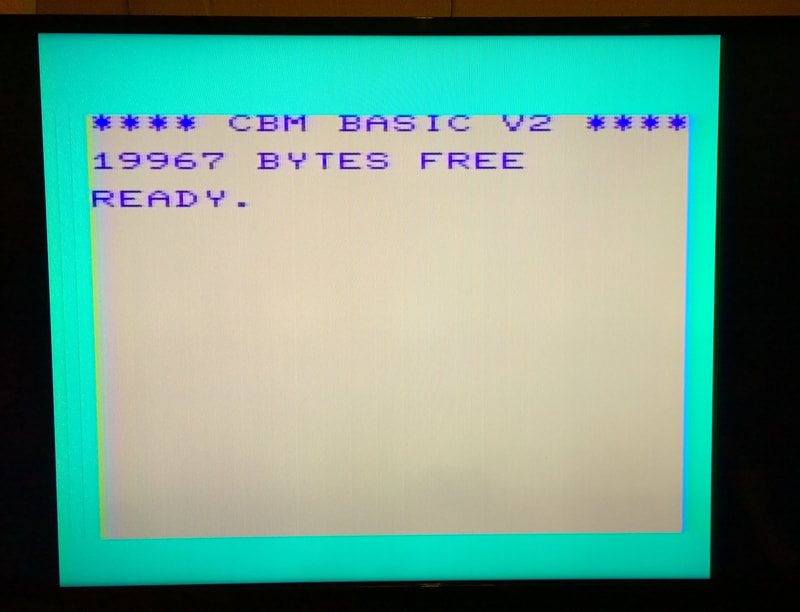 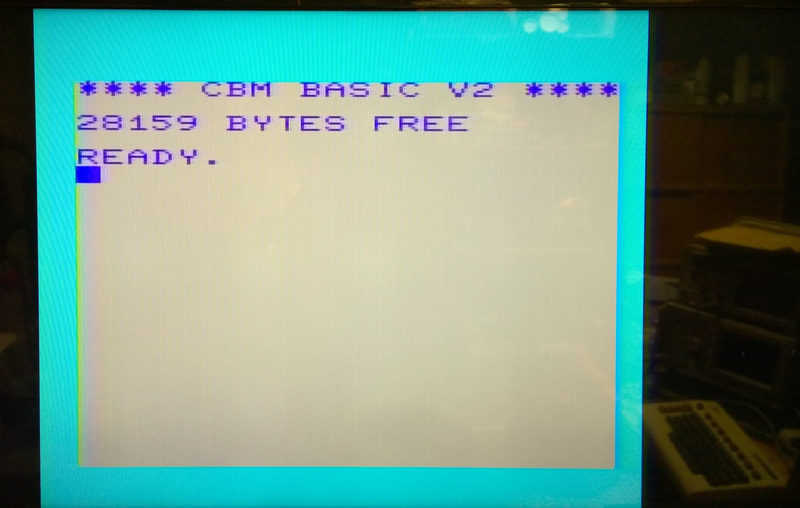 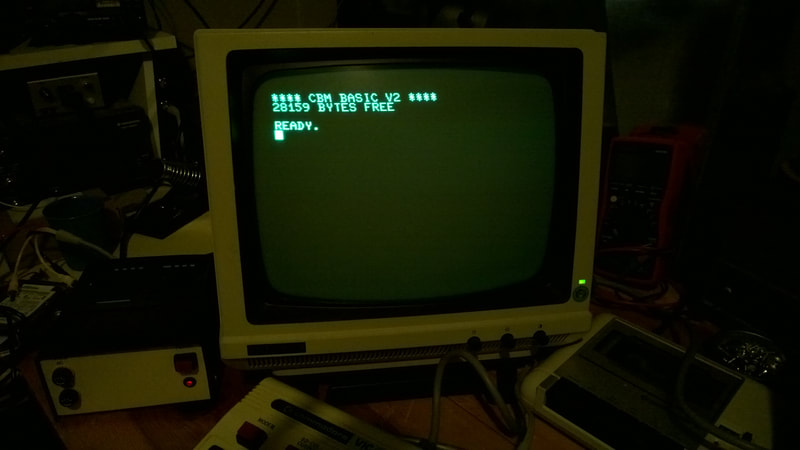 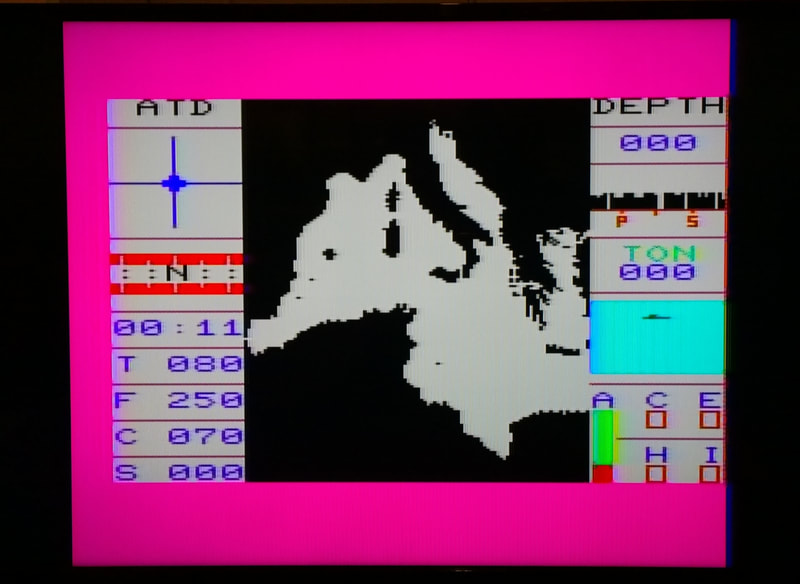 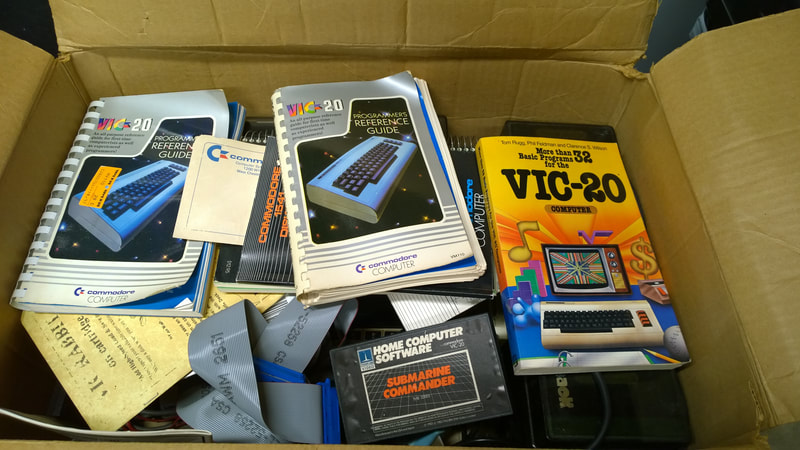 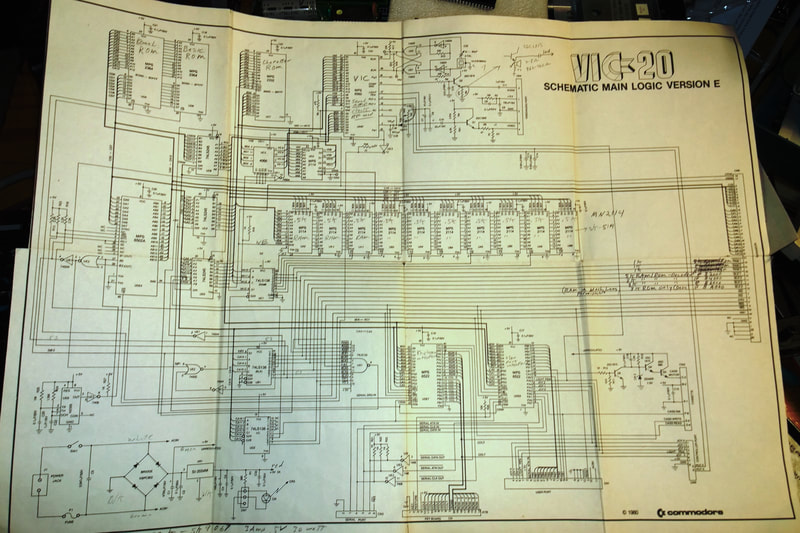 ​When I got to WVU, I discovered that they had a statewide VAX/VMS system where I could log in from the privacy of my room, which was actually an end-of-hall RA 's room in a coed residence hall. The administration figured that since I was an older student, I needed privacy and the room was vacant. I had a 300 baud modem, so I was really in business. Soon friends were coming to my apartment to do their homework and even play games like Submarine Commander and Shogun. I bought a 17-inch NEC monitor TV with stereo sound and composite video and RGB inputs to complement my Gorilla green screen. My "Super Vic" carried me all the way through engineering school. But by graduation we were using IBM PC’s with dual floppy drives and then a new device called a hard drive. I carried the VIC in a large old Samsonite suitcase, with custom foam that I cut out to hold the VIC, the power supply, the tape drive, and other stuff. When I moved to Maryland and bought a house, I put the suitcase in my attic, where it has remained since 1988.

I knew that it would someday just get thrown out, and I wanted to try using it with a Kantronics Mini-Reader code reader which can be programmed with a VIC, so I went up to the attic and brought down the suitcase. Surprisingly, the heat from the attic didn’t warp or melt anything.

I inspected everything and took the cover off the power supply and checked the Nichicon electrolytic and other parts with my meter. There was a problem with a small cap used to reduce hum - it was leaking 10 volts AC to ground. After bringing it up again with my Variac, and testing the voltages at the power connector, I plugged in the VIC.

Of course, it didn't boot at first. There was also no video with error messages. I opened it up and cleaned the connectors and switches, as well as the 6522 and 6502 IC pins with DeOxit Gold and tried it again. It booted right up, and it works. And my favorite games (Submarine Commander and GORF) still work. Very basic graphics but a lot of fun. GORF is my daily cardiovascular test.

I haven't cleaned the case yet. And somewhere, I have dozens of pictures that I took with a Pentax Spotmatic and various flashes, including a ring flash for the submission to RUN or Ahoy! magazine. But these quick shots that I took will tell the story.

Why the addressable memory switches? Because back in those days, various programs required different memory levels due to the way the memory registers were arranged. Crazy. BUT AFTER 40 YEARS, IT STILL WORKS!

When I built it, I repurposed the original power switch to turn on the upper level boards. With that switch "off", it reverts to a basic VIC-20. Also, here's a fun glitch - if I play games with the green screen and color monitor on, the color screen no longer shows the scores. They appear on the green screen!
Some people like Don Reuter of www.mainbyte.com have created awesome full-size schematics and links to information about old computers and their accessories. The links below came from his site. In one of the large schematics, I've added some of my own notes from my old documents.